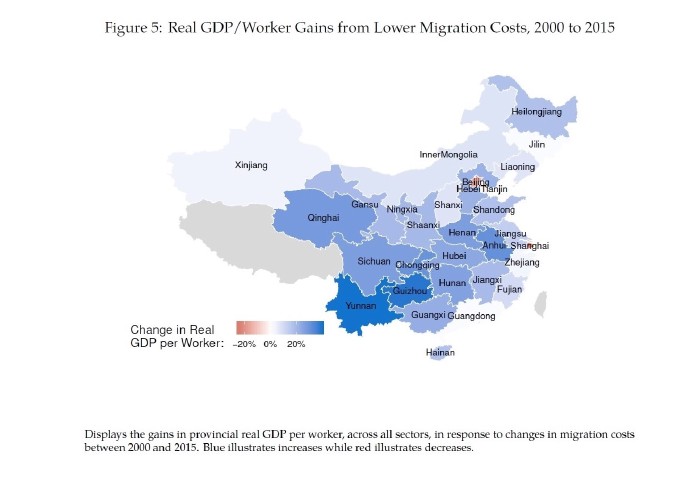 Between 2000 and 2015, China’s aggregate income quadrupled, its provincial income inequality fell by a third, and its share of employment in agriculture fell by half. Worker migration is central to this transformation, with almost 300 million workers living and working outside their area or sector of ( extit{hukou}) registration by 2015. Combining rich individual-level data on worker migration with a spatial general equilibrium model of China’s economy, we estimate the reductions in internal migration costs between 2000 and 2015, and quantify the contributions of these cost reductions to economic growth, structural change, and regional income convergence. We find that over the fifteen-year period China’s internal migration costs fell by forty-five percent, with the cost of moving from agricultural rural areas to non-agricultural urban ones falling even more. In addition to contributing substantially to growth, these migration cost changes account for the majority of the reallocation of workers out of agriculture and the drop in regional inequality. We compare the effect of migration policy changes with other important economic factors, including changes in trade costs, capital market distortions, average cost of capital, and productivity. While each contributes meaningfully to growth, migration policy is central to China’s structural change and regional income convergence. We also find the recent slow-down in aggregate economic growth between 2010 and 2015 is associated with smaller reduction in inter-provincial migration costs and a larger role of capital accumulation.